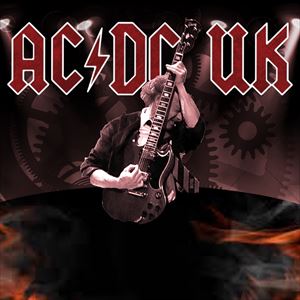 AC/DC UK – ‘BACK IN BLACK’ 40TH ANNIVERSARY + HITS TOUR
Fronted by the most authentic Angus Young, and 80’s era Brian Johnson in the business; AC/DC UK deliver up to a 2 hour powerhouse show, featuring all the AC/DC hits; with a few fan favourites thrown in to boot! The experienced backline drive out the set with the same tenacity, volume, and passion as the real deal! All the AC/DC gimmicks are brought out to whip the crowd into a frenzy! From Angus’ famed striptease, Brian’s iconic flat cap, a giant inflatable Rosie, and fully firing cannons to salute those who are ready to rock! June 2018 saw the British tribute band, AC/DC UK embark on one of their biggest shows in the band's history. Closing the Friday night of Graspop, the band played just after legendary headliner's Iron Maiden to a packed out Metal Dome. Other acts to play the hallowed turf in Dessel, Belgium included Guns N' Roses, Ozzy Osbourne, Volbeat, The Darkness, Avenged Sevenfold, Judas Priest, Marilyn Manson and a raft of other rock superstars. The past several years have seen the band play several other notable shows and festival?s alongside the likes of Alice Cooper, The Darkness, Steve Vai, Santana, Magnum, Within Temptation, Saxon, and more. 2019 looks to be one of AC/DC UK’s most explosive years to date!