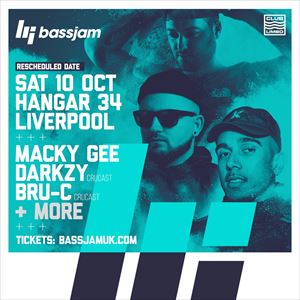 JOINED BY MANY MORE OF THE FINEST LOCAL TALENTS

BassJam and Club Limbo are pleased to announce that they are joining forces to bring Drum and Bass legend Macky Gee and Crucast’s very own DJ Darkzy and MC Bru-C to Liverpool’s Hangar34 on Saturday the 10th of October.

Kent based Drum and Bass don Macky Gee has enjoyed huge success since beginning his DJing and Producing career at the young age of 16. His heavy bassline and choppy synth combinations have resulted in huge support from Radio 1, Radio 1Extra, Kiss FM and Rinse FM, and his huge 2016 album ‘Sway’ made it into the Official Top 20 charts in both the UK and Europe. Macky is also one part of one of the biggest acts in DnB right now, SaSaSaS, who have been causing a major storm in the festival world and selling out club shows across Europe. He is sure to have the entire club going wild during his set, this is most definitely not to be missed.

CruCasts very own King of Bass is up next on the roster, Darkzy is known for his high energy sets with filthy drops and basslines throughout. He has gone from strength to strength over the last year and has really grounded himself firmly within the bass music scene as a force to be reckoned with. We are greatly looking forward to welcoming him to Liverpool.

Joining Macky Gee and performing alongside Darkzy will be Bru-C, Nottingham born and raised he is the MC at the forefront of the bassline scene often performing alongside fellow CruCast member Skepsis. Having collaborated on some huge projects with the likes of Skepsis and Example, it is evident that he is making big moves expanding across several genres. Attendees can expect naughty basslines and high energy from his and Darkzy’ set on the night.

Joining Macky Gee, Darkzy and Bru-C on the bill will be a selection of the finest local DJ talents TBC!!

In recent years Hangar34 has grown to become one of the favorite music venues in Liverpool. At the heart of the Baltic Triangle, the versatile venue is enjoyed by hundreds on a weekly basis and has seen a star studded calendar of guests and acts through its doors since its opening, as well as a range of daytime events.