Batesy as Eminem - Its OK To Not Be OK show 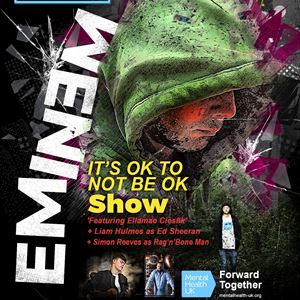 Mental Health is an ever growing condition that society has finally started to recognize as a real rising issue that, for many, will take a toll on us all at some point in our lives. Whether that toll is a battle we fight with our own demons, or see our loved and closest ones fight, it is something that will affect us all. Mental illness takes many forms and is never obvious or apparent to outsiders and even sometimes to the individual suffering. Mental illness does not differentiate who it claims. Male or female, old or young, rich or poor, Mental illness takes all for its victims.

Eminem, the iconic rapper and media/social figure, is one such individual who has suffered at the hands of mental illness over his long career. His music speaks volumes of his personal battles that he fought with his demons and how he dived into the depths of alcohol and substance abuse in an attempt to keep his demons at bay.

Tom Bates (Batesy) has experienced his own share of mental health problems, and with the help of Brett Hall and Laura Smart is hoping to raise awareness by performing as his hero Eminem for the evening. “For years I have struggled with mental health issues and have used alcohol and substances to suppress the way I felt inside. Depression, anxiety and low self-esteem have all affected me at some point, but I was too afraid and embarrassed to talk about my struggles. My mental state descended to state where I no longer wanted to live.

Since getting clean and battling my demons (much like my hero Eminem) I want to raise awareness and funding for those who struggle with any form of mental illness. Music has always been a powerful weapon to combat the storm inside my head at times, which is why I dreamt up the idea of putting on this show

I want everyone to remember its OK to not be OK, and never be afraid of opening up to someone if they are struggling

You can’t change the world until you change yourself, so let’s change the way we tackle mental health together”