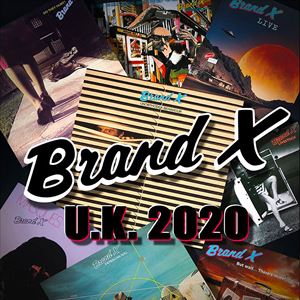 For 10 years there had been rumors of BRAND X reuniting, and then in late 2016 it happened. Founding members Percy Jones (Bass), John Goodsall (Guitar) and Kenwood Dennard (Drums) pulled it off – and there was much rejoicing. Completing the band were Keyboard whiz Chris Clark and Percussionist Scott Weinberger. Fast Forward to 2019: Rave reviews in The Huffington Post, Progression Mag, New York Times, Innerviews, etc -- coupled with jaw-dropping performances at Ros-Fest, ProgtoberFest, ProgStock and Cruise To The Edge 2019 lead many critics to claim this: “The Best BRAND X of all time!”

That’s pretty high praise for a band that once sported PHIL COLLINS as their original Drummer. Nowadays a virtual “Who’s Who” of Rock has come out to catch them live, including members of YES, KING CRIMSON, DREAM THEATRE, STEVE HACKETT, ADRIAN BELEW, FOCUS, THE DIXIE DREGS, RENASISANCE, METALLICA and others...

In 2017 Dennard became the head of Drums/Percussion Dept. at Berklee College in Boston, and in stepped Kenny Grohowski on Drums – that’s when the ravings about “Best Live BRAND X Ever!” really began. Now in 2019 with the addition of Alex Machacek on Guitar for all International shows, the sky’s the limit (Don’t worry, Goodsall still plays on all U.S. shows)

Some nice people said some very nice things – and we didn’t even have to buy them drinks:
# 2 Boston Mass Radio, New-Ears-FM
#11 Progressive Charts in Prog Magazine
#13 International Sales in Burning Shed
#20 Album in All About Jazz

But our favorite is from a fan in New Jersey who said: “I’ve been playing drums for 30 years, but after seeing this guy Kenny in Brand X, I’m going home to burn my kit – right now!”