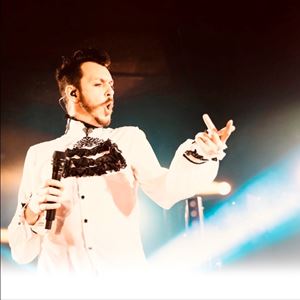 Performing Queen’s iconic, multi-platinum 1980 album The Game in its entirety, plus several other ‘Deep Cuts’ and greatest hits
Bulsara and His Queenies are a remarkable 7-piece band that perform the music of Queen to an exceptional and spine-tingling standard.

Made up of young music graduates and a former physics teacher, they have their own identity: not quite what is expected of your typical ‘Queen Tribute Band’. There are no wigs, no yellow jacket and no attempt to look like Queen.

The quality of the musicianship is world class. Lead vocalist Gareth Taylor’s vocal resemblance to Freddie Mercury is extraordinary. Backed by superb vocal harmonies and a meticulously accurate back line, lead guitarist Robert Hudson’s ability to recreate the classic ‘Brian May sound’ has to be heard to be believed.

The headline act of The Official Freddie Mercury Birthday Party in 2018, 2019 and 2020 Bulsara and his Queenies have become globally recognised as an alternative tribute to undoubtedly the World’s biggest band. There is no attempt to look like Freddie Mercury, Brian May, Roger Taylor and John Deacon, simply an emphasis on Queen’s beloved catalogue of stunning album tracks, soaring anthems and huge chart-topping hits.