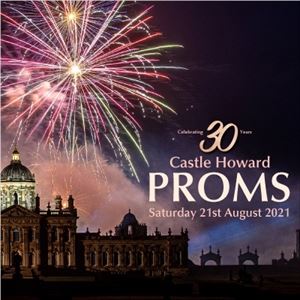 Set in the magnificent gardens of Castle Howard, this spectacular classical concert will be a night to remember for the whole family, with the two guest soloists now confirmed. Best-selling tenor Wynne Evans will be joining soprano, Victoria Joyce for Yorkshire's most prestigious al fresco Proms event.
Wynne Evans is a best-selling classical artist, with his debut album with Warner Music going straight to number one in the classical charts. His acclaimed performance in the 25th anniversary performance of The Phantom of the Opera, and appearances in a host of concerts at the Royal Opera House, English National Opera and Opera North have made him an incredibly popular live performer, whilst he is also well known for his decade in the recurring role as Gio Compario in a series of TV adverts.

'Wynne's performance at last year's concert was just spectacular and we're delighted to be welcoming him back to the Castle Howard Proms,' comments promoter and event organiser, Mark Harrison.

Victoria is without a doubt one of the UK's most exciting performers. After studying at the Royal Northern College of Music she made her English National Opera debut in 2003 as La Charmeuse in Massenet's Thaïs, and has returned to ENO on many occasions since performing roles such as Queen of the Night in Mozart's The Magic Flute and Rosina/The Barber of Seville. Also appearing at prestigious opera houses including La Fenice, Hamburg State Opera; the Semper State Opera in Dresden and Rossini Opera Festival in Pesaro.

The rousing musical accompaniment to the evening will be provided by the London Gala Orchestra under the baton of Stephen Bell.

The programme will include popular classics, songs from musicals and all your flag waving favourites from the Proms including Jerusalem, Rule Britannia and Pomp & Circumstance No.1. With a Spitfire flyover, stunning lasers and spectacular firework finale, this will be a magical evening of musical entertainment.

Accessible Tickets - Entitles the bearer to bring 1 (one) carer free of charge. Please note that Carer Tickets are not issued online. To obtain a Carer Ticket you will be required to present a valid disabled adult ticket and proof of entitlement to DLA or PIP (higher rate), Attendence Allowance (higher rate) or a valid Access Card (via CredAbility) to the Box Office at the Main Entrance on the day. Our customer service staff will issue Carer tickets accordingly.