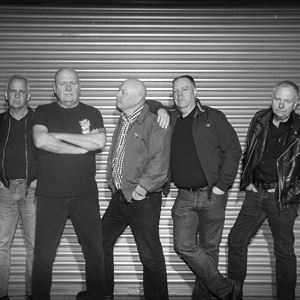 + support Spunk Volcano and the Eruptions

Uncouth as its possible for a band to project. Imagine five collectively imageless Cockneys with hair length varying from skinhead to Woody Roller, wearing clothes that looked they pool from the jumble sales, and singing about how East End life is tough but fun…(they)…create a good time sound that occasionally approximates to the original spirit of Slade.”

When the Oi! Scene started in 1980 the band found themselves on a number of compilation albums and a new breed of fans discovered them. This was Punk from the streets and Sparrer and their fans just seemed to fit in. 1983 saw the release of the bands first official album, the seminal SHOCK TROOPS which today is a certified classic and regularly features in the ‘most influential punk album ever’ polls.

Never having got (or needed) the critical acclaim they deserved from the music press the band went largely unnoticed by the masses. However, this brought them cult status amongst those that mattered; the real punk fans and the band have kept that spirit alive for the past 45 years.

1992 saw the resurgence of the band to a level that they never expected. Many new bands had come along and all cited Cock Sparrer as an influence or “the Godfathers of Street Punk”. What followed was the ability to go anywhere in the world, any night of the week and play to packed venues all singing their hearts out.

Rarely do a band get the reaction that these guys do. A Cock Sparrer show is an event. It’s like cup final day. A family singalong. Theirs is a career in reverse, they’re bigger now than they ever were. Regularly headlining all the major punk festivals in Europe and occasionally hitting the US to headline events such as Punk Rock Bowling and Riot Fest.