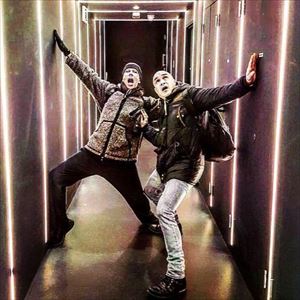 Snake Oil and Harmony -Press Release-October 25th, 2019‘Snake Oil and Harmony’ formed in 2015 when Danny Vaughn and Dan Reed, lead vocalists and main songwriters for ‘Tyketto’ and ‘Dan Reed Network’, respectively, joined forces to create a live acoustic touring act sharing their songs and the stories behind the music with audiences throughout Europe.Renowned UK rock journalist ‘Dave Ling’ from Classic Rock commented that a ‘Snake Oil and Harmony’ live show is like “going to rock and roll church”, and with such favourable reviews from the audiences and the press alike it has given inspiration to take things beyond the live stage and in to the studio.After doing two extensive live tours together and making critically acclaimed appearances at assorted festivals and the ‘Monsters of Rock Cruise’ in America, Danny and Dan decided to try their hand at writing new songs together over the last year. This has yielded an exciting new ‘Snake Oil and Harmony’ chapter and a full-length album recorded at the legendary ‘Faust Studios’ in Prague.The new album featuring Sweden’s top musicians ‘Robert Ikiz’ on drums and ‘Bengt Jonasson’ on Bass, with Vaughn and Reed handling guitars and vocals, was written and recorded in the spirit of some of their American musical influences such as Bruce Springsteen, Tom Petty, and John Cougar Mellencamp, while embracing a sound all their own.The album will be released in March of 2020 to coincide with Live Dates in the UK, Sweden, Germany, Spain, Austria and other territories throughout March and early April! This tour will bring their first appearances in cities like Stockholm and Goteborg, Sweden, and they are thrilled to be taking the brand new ‘Snake Oil and Harmony’ album they have created together out on the road next year, while sharing the creative process that got them to this point. Of course,you can also expect classic Dan Reed Network and Tyketto songs in the mix