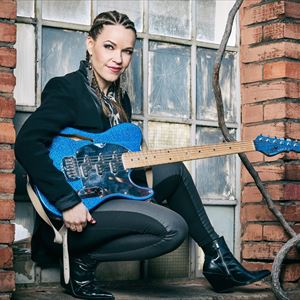 Bernard Allison is unstoppable. He’s the face on the magazines and the voice on the radio. He’s the showman roaming the open road on the 2018 Blues Caravan tour, bringing it to the people each night with compadrés Mike Zito and Vanja Sky. He’s the visionary songwriter whose latest studio release – Let It Go – is already tipped as a top album of 2018. It’s a work ethic that would leave most musicians gasping but for this creative dynamo – now entering his fifth decade at the head of the blues pack – it’s all in a day’s work.

Starting the blues calendar with a bang in January 2018, Let It Go feels like a homecoming. After all, this latest studio album sees Bernard return to Ruf Records: the iconic German label that was created in 1994 to serve as a home for his father, the much-missed Chicago heavyweight, Luther Allison. Just as significant, Let It Go also found Bernard recording in the birthplace of the blues – Tennessee – and returns his sound to its raw fundamentals, on 12 songs that hold up without embellishment. “Let It Go was recorded at Bessie Blue Studio, Stantonville, Tennessee, with legendary music producer Jim Gaines,” recalls Bernard. “We made the decision to not flood the CD with keyboards or horns, to go back to the true basic rhythm section sound – and to show more mature songwriting.”

Since he opened his solo account in 1990 with The Next Generation, Bernard’s songwriting has been on a steep upward trajectory, and Let It Go represents a new peak. On a twelve-song tracklisting, Cruisin For A Bluesin opens proceedings in style, with a clipped funk-blues lick and a lyric that sums up Bernard’s existence since he first guested with his father in the late ’70s (“Gonna groove on down this highway, got my guitar in my hand”).

“She is the future” (Carlos Santana)
Since first entering a recording studio some 15 years ago, singer/guitarist Erja Lyytinen has become a bona fide star in her homeland and a fixture on the international music scene. In that time, "the Finnish slide goddess" (The Blues Magazine) has recorded in places as diverse as Helsinki, London and Memphis, earning numerous accolades along the way. Rooted in both traditional and modern blues, she successfully blends styles like jazz, pop, soul and rock into a sound all her own. Celebrated slide guitar master Sonny Landreth, upon discovering Lyytinen's music recently, remarked: "I sure enjoyed her guitar skills. She’s obviously made a big name for herself. Things are going well for her and for good reason."