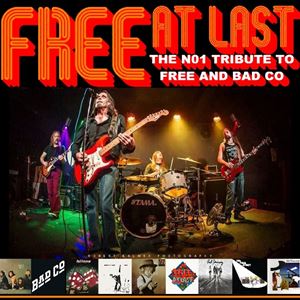 Free at Last
All Free At Last performances

Free at Last – (a Free and Bad Company Tribute Band) were formed in 1982 under the name Uncle Sam. Uncle Sam featured three of the current members, Jak (guitar/vocals), Shane (guitar) and Mick (drums) until Dave joined on bass in 1994.

Uncle Sam’s set contained a few original songs plus covers by such classic acts as ZZ Top, Pat Travers and of course Free. All the guys in the band have always had a great passion for the music of Free, so in 1996 when deciding to create a tribute there was only one choice who it would be. Since then they have gone from strength to strength headlining at Bill Flynn’s Free Convention and playing many of the top venues around the country, universally agreed to be the best Free and Bad Company tribute around.

With the original Bad Company reforming to promote their Anthology 2cd set, Paul Rodgers releasing solo albums and joining Queen as their singer for a world tour, it only serves to prove sustained interest in what the band are trying to recreate. So for a night of 70’s style red hot blues influenced, soul stealing ROCK the choice must be FREE AT LAST!