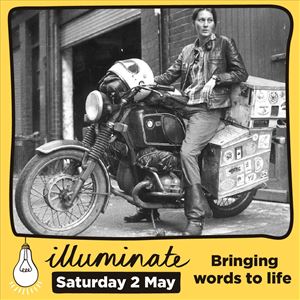 Elspeth Beard -  is a motorcyclist and award-winning architect. In 1982, at the age of just twenty-three, Elspeth Beard left London and set off on a 35,000 mile solo adventure around the world on her 1974 BMW R60/6 and became the first British woman to motorcycle around the world.
She had ridden bikes since her teens and was well travelled but nothing could prepare her for what lay ahead. When she returned to London nearly two and a half years later she was stones lighter and decades wiser.
Her two-and-a-half year journey saw her survive life-threatening illnesses, brutal accidents and third world hospitals that left her with permanent scars and memory loss. Along the way, she witnessed riots and civil uprisings that altered the course of nations, fended off physical threats, sexual attacks and corrupt police, and even managed to fall in and out of love with three men.
Her trip would still be considered impressive nowadays, but the fact that she was a young woman in her early twenties, setting off alone with no sponsorship or support, in an age before email, cell phones and satnavs makes her journey all the more remarkable. It was not until 2008 that she discovered that she had become the first British woman to ride a motorcycle around the world.
She runs her own architectural practice, specialising in creating and remodelling interesting and unusual buildings. She lives in a converted Victorian water tower in the southeast of England and still enjoys riding her collection of motorcycles, which includes the trusty BMW R60/6 which carried her around the world.

Illuminate is a brand new festival taking place in Godalming, Surrey on the 2nd of May, bringing authors, poets, musicians, illustrators, and adventurers to the town. A one-day literary celebration that will incorporate spoken word, comedy, author talks, illustration and writing workshops, a songwriting circle, a short story competition, and a host of other fantastic events.