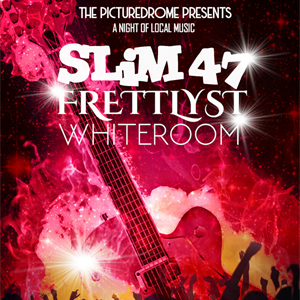 A Night Of Local Music

Whiteroom, Slim 47 & Frettlyst will be performing live on the night! Three top bands will get together to play top party covers throughout the night making.

A four piece band that specialize in contemporary Rock & Pop music.
They play the finest blend of chart toppers from over the last 30 years from artists such as: Kings of Leon, Blink 182, U2, Stereophonics, Ed Sheeran, Greenday, The Calling, Red Hot Chili Peppers and many more!

Slim 47 are an indie/rock covers band based in Northampton.
They play up to date tracks from bands like the Foo Fighters, Oasis, Queens Of The Stone Age, and Killers to name just a few.

Slim 47 has built a reputation as being one of the best cover bands around.
With their full on set consisting of the biggest indie/rock hits from the past two decades.

Frettlyst are a 5 piece indie rock band from Kettering, UK. Originally starting life as a two piece acoustic duo Loz (vocals) and Brett (guitar) regular played in venues around Northamptonshire. Over a few years they recruited their drummer Tommy, rhythm guitarist Dan and bass player Steve.
They have played together for over a year playing in Northamptonshire while working on their original material. Their style pulls inspirations from creamy classic rock solos and up beat modern indie rock genre, these boys will have you rocking out in no time at all. They take their influences from band such as, Arctic Monkeys, The Strokes, Kings, Oasis, The Smiths and Jimi Hendrix.
Order Of Play
Doors 8pm
Frettlyst - 8:15pm
Slim 47 - 9:30pm
Whiteroom - 10:45pm
Each band will play a 1 hour set!