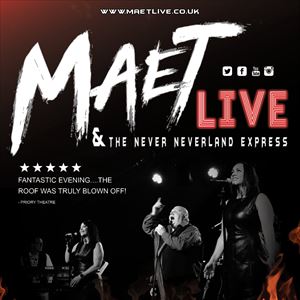 Maet Live & The Never Neverland Express are back at The Robin 2, this time to celebrate 25 years since the release of Meat Loaf’s only ever UK number 1 'I’d Do Anything For Love (But I Won’t Do That)' which was released back 1993. The song was the first single to be released from the long awaited second album in the Bat Trilogy, Bat Out Of Hell II: Back Into Hell.

The show will include other hits from this album such as Life is a Lemon, Rock & Roll Dreams Come Through & Out of the Frying Pan.

So come and Join Craig and the gang back once again on their home turf and enjoy a night of what it says in the song… “Sex & Drums & Rock ‘n’ Roll”…. Or as Craig says… “Sex & Drums & Sausage Rolls”.