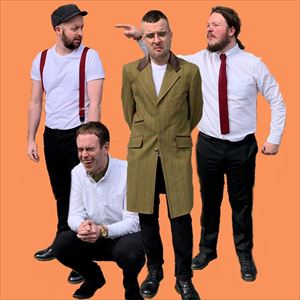 All Man & The Echo performances

Man & The Echo is an eclectic and strange thing formed in 2014, by songwriters Gaz Roberts and Joe Forshaw, Drummer Joe Bennett and Keyboardist Chris Gallagher. Sometimes referred to as “odd ball” or “quirky,” the band are currently writing their own PR materials.

They were signed to James Endeacott’s resurgent 1965 label in 2015 after James heard the band’s self-released ?rst single, “Beg”, and came to watch them rehearse in a church in Warrington. The band released a double A side, “All Right”/“Honeysucker” on 1965 later that year, with “All Right” getting the band’s ?rst national airplay on BBC 6Music and Absolute Radio.

In early 2016 the band released another double A side, “Vile As You Want”/ “I Don’t Give a Fuck What You Reckon” with the latter becoming a cult hit amongst M&TE’s steadily growing live following. Throughout their ?rst year on 1965, the band played club nights all over the UK, as well as being invited to perform on Billy Bragg’s Left?eld stage at Glastonbury in both 2015 and 2016 and a host of other major UK festivals including The Great Escape, Kendal Calling and Secret Garden Party.

The band’s radio presence increased with live sessions on BBC Radio 4’s Loose Ends, Radio X, Absolute Radio, and a live BBC 6Music session for Steve Lamacq on the same day that their self-tilted debut album, “Man & The Echo” was released in November 2016. The LP, containing singles “Distance Runner” and “Operation Margarine” was a 6Music Album of the Day and was also highly praised on the station’s review show, Roundtable.

The bands ?rst ever UK Headline tour soon followed in the spring of 2017 resulting in Manchester, Liverpool, Birmingham, Bristol, London and others quickly selling out. The summer was littered with performances and further support tours for the likes of The Rifles and The Strypes.

Man & The Echo spent most of 2018 holed up in their base at “Tu? Gong Studioplex” (Warrington) completing the songwriting, arranging and administrative tasks associated with the production of a new album of music. By mid 2018 the band had received Arts Council funding to complete the project and the recording took place in London later that year after the band enlisted producer Raf Rundell (2 Bears/Raf Daddy). M&TE will release a new album in the summer of 2019 after a series of singles are released.