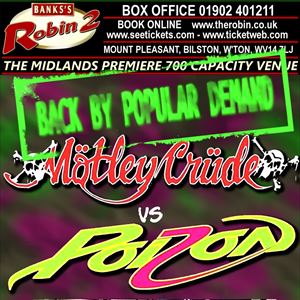 MÖTLEY CRÜE is The World’s Most Notorious Rock Band. Vince Neil (vocals), Mick Mars (guitar), Nikki Sixx (bass) and Tommy Lee (drums) laid the foundation for their inimitable career in the '80s with their genre-bending music, a mix of anthemic choruses, stadium-sized riffs, punk rock and melodic power, along with their relentless reputation, typifying an excess never before seen in modern music. On December 31st 2015 they performed for the last time at a sold out Samples Centre in Los Angeles on The Final Tour which made the band over $32 million.

Mötley Crüde (circa 2015) are the UK's only tribute to the Lewd, Crüed & Tattooed rockers from the Los Angeles Sunset Strip! Performing to thousands of people on a regular basis in every city the UK has to offer, they have quickly become a fan favorite on the tribute scene. With over 100 years combined experience, Mötley Crüde deliver a show like nobody else. Fans can expect to hear songs from the first album Too Fast For Love (1981) and everything in between up the final album, Saints of Los Angeles (2008) and even songs from the 2019 movie ' The Dirt'. Whilst every previous tribute had focused on the bands later years, Mötley Crüde bring a fresh new approach by perfecting the styling of the band from their most successful era, Dr Feelgood (1989/90). No expense has been spared, high end costumes, authentic instruments and the attitude to transport fans back to the good old days when rock 'n' roll ruled the airways, Rock Stars were gods and everyone wanted to get a piece of the action!

POIZON create the sights, sounds, and all round entertaining rock atmosphere that America's biggest arena rock band did back in the 90's.

The original Poison have sold over 50 million records worldwide. The band have also charted ten singles to the Top 40 of the Billboard Hot 100, including six Top 10 singles and the Hot 100 number-one single, "Every Rose Has Its Thorn"

Whether you loved them back in the day and you're reliving those crazy nights out, or you've just discovered them thanks to the resurgence of 'Hair' metal, POIZON will show you how to party !!!