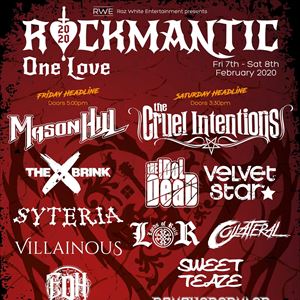 Rockmantic Weekender started back in 2013 with 8 bands mostly made up of local Cumbrian acts. One name in particular stands out considerably. Massive Wagons opened the two day event and became firm favourites several further years. Massive Wagons have since developed into the biggest name in home grown British rock, opening for Lynyrd Skynyrd on 4 Arena shows and playing to hundreds of thousands at festivals everywhere.
Quickly recognised as the mini indoor festival to find the next big breakthrough bands, Rockmantic can be noted for bringing bands such as The Cruel Intentions,  Niterain & Confess to the UK and also bringing several hundred music lovers into Carlisle on an annual pilgrimage.
2020 sees the brand come to a super charged end due to organiser Raz White working flat out on the new outdoor Call of the Wild Festival.