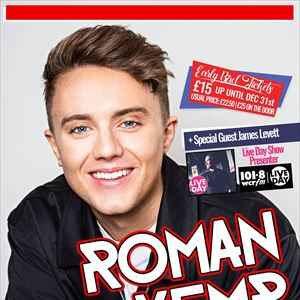 3rd place runner up on I'm A Celebrity 2019 and Capital Radio DJ Roman Kemp is coming to The Robin on Sat 21st March playing all the sounds that make his Morning Show the most popular. His on-air guest list, including so many famous mates, is spectacular!

Following in the footsteps of his father MARTIN KEMP who recently sold out The Robin with his own DJ set in June 2019, we expect Roman to follow suit with a sell-out show of his own so don't hang around, grab your tickets now!!

At just 25, Roman Kemp is one of the country’s youngest and most promising broadcasters, having held the crown as Best Breakfast Show in London, on hit music station CAPITAL FM with co-host Vick Hope and Sonny Jay. Having previously had his own successful evening daily show and mid-morning Sunday slot on the popular station. He has interviewed some of the biggest names in the entertainment industry, including the likes of Justin Bieber, Little Mix, Meghan Trainor, Calvin Harris, Ariana Grande, Selena Gomez, Ed Sheeran and Jennifer Lawrence.

Born in Los Angeles, Roman has always had a keen eye on the entertainment world. At the age of 15 he signed a record deal with Universal Music. With a development deal with MERCURY, he got to work with great artists and play incredible venues.

Roman was announced as part of The X Factor presenting team and went on to present his own segment on the live Xtra Factor ITV2 show. He’s gone on to present the TV Baftas, the Global Awards for two years running, as well as hosted countless film premieres!

Roman’s other work includes voicing the UK series and the Global series of Takeshi’s Castle and commonly appearing on This Mornings ‘Showbiz’ segment. Roman’s collaborated with top brands such as; EE, Cadburys, Absolut and Coca Cola. Before his presenting took off, Roman also forged a successful modelling career, modelling campaigns for the likes of Topman and Dropdead.