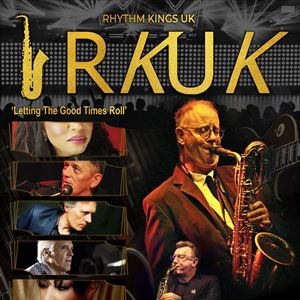 All The Rhythm Kings UK performances

The very welcome return of The Rhythm Kings UK

In 1996 a group of musicians were assembled to form a supergroup. Musicians involved in this project were numerous and included many household names. Players such as Peter Frampton, Graham Broad ,Gary Brooker, Geraint Watkins ,Andy Fairweather-Low, Mike Sanchez, Georgie Fame, Frank Mead ,Martin Taylor, Nick Payn , Albert lee and Chris Stainton. The one female addition was Beverley Skeete.Thus the Rhythm Kings were born.

After many years of touring members went their separate ways .but with the success of Beverley's solo project she managed to convince some of the original key players to join her in reforming a smaller version of the band in order to resume touring again. After a few sold out shows it was evident that there is still a market for excellence such as the Rhythm Kings.

BEVERLEY SKEETE started her professional life recording and releasing singles on a small label called Elite Records. Her soulful voice created a stir at a time when most Soul singers came from America. DJs such as Robbie Vincent and Tony Blackburn supported her and played her records gaining her a reputation as a singer to be reckoned with. She also gained a die hard following.

In 1992 Beverley would finally have her first hit as featured vocalist on the Gat Decor single "Passion" performing on Top of the Pops as an artist in her own right.

Since then Beverley has worked with artists such as Chaka Khan, Dave Gilmore, Will Young, The Eurythmics and Annie Lennox's solo tours. Her vocals can be heard on the albums of artist such Elton John and Tina Turner.

GARAINT WATKINS left Art College in the early 70’s to pursue his musical interests becoming a member of noted British bands, Juice on the Loose and Red Beans & Rice. Session work followed, recording and playing live with Dave Edmunds and including the memorable T.V special with Carl Perkins, and on many others from Dr. Feelgood, Rory Gallagher, and John Wesley Harding to Tom Jones and John Martyn, not to mention the hits of Shakin' Stevens. Later he worked with Van Morrison, Nick Low, Paul McCartney, Mark Knopfler and Peter Green. Geraint has released many solo albums including, ’Geraint Watkins And The Dominators’, . ‘Dial W for Watkins', 'Watkins - In A Bad Mood' and 'Moustique'

GRAHAM BROAD At the tender age of just 16, Graham Broad started his career touring with The Drifters. His career started to go from strength to strength, and he went on to work with many more Soul Acts such as, Aretha Franklin, The Temptations, Sam Moore, The Fifth Dimension, Solomon Burke, to name but a few.

After many years of touring, Graham decided to become a session musician to allow him to work on all genres of music. This gave him the ability to learn more styles and techniques and grow as a drummer. With this he has been able to work with an array of diverse acts such as, Stevie Wonder, Tina Turner, Procol Harum, Eric Clapton, George Michael, Bryan Adams, Jeff Beck, The SL5 Geezers, and Bill Wyman.
Since the early 80s Graham has toured and recorded with RogerWaters and is still playing with Roger today.

NICK PAYN career includes concert tours, radio and TV broadcasts, arranging and session work. He was a member of the Q Tips (featuring Paul Young) and Gary Moore’s Midnight Blues Band. He was also a long-time member of Lonnie Donegans skiffle group. His many session credits include work for The Kinks and Paul McCartney. In addition he performs with his own saxophone quartet at many venues in and around London.

SARA-JANESKEETE is a well-respected vocalist within the industry. She has earned her reputation by working with artistes such as Cliff Richard (with whom she duetted on his tour) Kylie Minogue, James Morrison, Scissor Sisters, Annie Lennox and Robbie Williams.