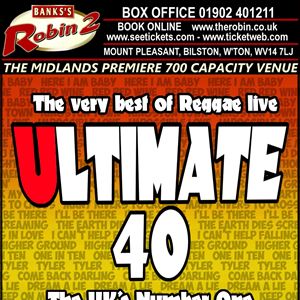 All Ultimate 40 - Tribute to UB40 performances

Ultimate 40 are a professional tribute band from Birmingham to Birmingham's very own superstars of reggae UB40.

Formed early 2016, this band consists of multi-talented musicians, some whom have played alongside the main man himself - Ali Campbell as well as many other famous musicians / bands such as , Musical Youth, Pato Banton, Maxi Priest, Aswad, Steel Pulse, Burning Spear, John Holt, The Beat, Freddie McGregor and Ken Boothe, just to name a few.

Ultimate 40 play all the great songs in original style, with their own added twist.

The band thrive on audience participation so everyone enjoys being part of the gig as much as us.